Doug Aitken (b. 1968) is an American multimedia artist. He moved to New York in 1994 where he had his first solo show at 303 Gallery. He currently lives and works in Venice, California and New York.

Although his vast body of work is well worth exploring I will focus only on his text sculptures in this post.

The following is an edited portion of Aitken’s interview with Dazed Digital.com:

Dazed Digital: What first inspired you to create artwork?
Doug Aitken: I have always just made things. I don’t see what I make as being defined by a medium or aesthetic. It probably comes more from a fundamental restlessness, an attempt to create tools for questioning, or understanding and I have always been interested in using a wide spectrum of mediums to do this. By my nature I love the non-linear aspect of art making, a dialogue that you have with someone in a taxi can suddenly become a film a week later.

DD: As an artist you are incredibly prolific. What is it that drives you to constantly keep making?
Doug Aitken: The easy answer would be mortality but ultimately, making art, is just what I do. It’s not really anything special; one thing leads to another and there is synchronicity. I like it when things move fast and intuitively. I find myself making works out of necessity to get closer to an understanding, or to use art making to dig into a question; into something that’s elusive and evasive to me.

We could be having this conversation now, and then, later, be driving through the desert together to make a film. I thrive off those experiences and I think the more open you are to exchange and flow, the more the creative electricity moves. I see life as a burning meteorite that you can climb all over, and feed off, as it is falling to earth.

I do so like that final sentence and I also admire the concepts and craftsmanship of his text based sculptures. 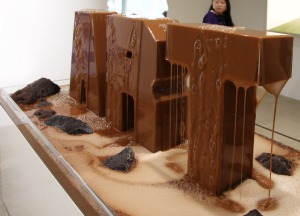 ‘The 100′ series was initiated by my 100th Post in April 2012. As text and images are the essence of my blog my intention is to present 100 pieces of textual art from historical and contemporary artists and from my own hand. To view the series to date click on ‘The 100’ in my Category Menu