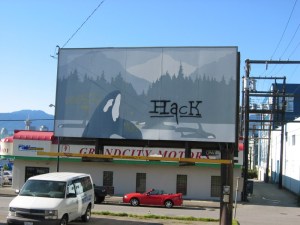 A hoarding decorated by a hired artist displaying iconic images of the north west coast: mountains, forests, ocean and a pod of killer whales. But the image has been hacked and the decorative idealism destroyed. The hacker’s addition is far from visually appealing and is far from the more aesthetic efforts of his spray painting ilk. He / she has hacked the mural with basic and minimalistic text but it is effective within its own context. Most will have considered this as pure vandalism with no artistic merit. I see it as an inartistic but honest attack on the surreal nature of such an image placed amongst the reality of such ugly and unappealing architecture which is itself a hack on the urban environment. The writer has obviously taken much effort to climb up to the high mural to post his / her iconoclastic statement and must have felt strongly enough about the mural to risk discovery and the legal consequences.
What do you think? 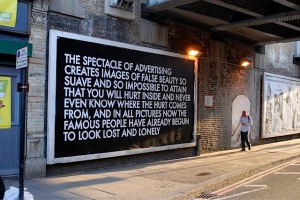 ‘The 100′ series was initiated by my 100th Post in April 2012. As text and images are the essence of my blog my intention is to present 100 pieces of textual art from historical and contemporary artists and from my own hand. To view the series to date click on ‘The 100’ in my Category Menu.