artratcafe CAFE concludes our celebration of the vegetable with potatoes, cabbage and beetroot. In my British childhood my mum always made ‘Bubble and Squeak’ as  a Monday (laundry day) dinner. It used the leftovers from Sunday – spuds, cabbage and sometimes beets – whatever we hadn’t eaten from Sunday dinner – (Recipe at very end if you make it that far).  This post is again inspired by poets and writers, including: Leonard E. Nathan, Charles Dickens, Alexandra Paul, Carl Sandburg, Charles Simic and Tom Robbins; and also by visual artists who are given due credit at the bottom.

Sometimes, the naked taste of potato / reminds me of being poor. / The first bites are gratitude, / the rest, contented boredom.

The little kitchen still flickers / like a candle-lit room in a folktale. / Never again was my father so angry, / my mother so still as she set the table, / or I so much at home.

“Papa, potatoes, poultry, prunes and prism, are all very good words for the lips”.   Charles Dickens.

“Meat is an inefficient way to eat. An acre of land can yield 20,000 pounds of potatoes, but that same acre would only graze enough cows to get 165 pounds of meat”.
Alexandra Paul.

She was about to chop the head
In half,
But I made her reconsider
By telling her:
“Cabbage symbolizes mysterious love.”

Or so said one Charles Fourier,
Who said many other strange and wonderful things,
So that people called him mad behind his back,

Whereupon I kissed the back of her neck,
Ever so gently,

Whereupon she cut the cabbage in two
With a single stroke of her knife.

From Jitterbug Perfume by Tom Robbins:

“The beet is the most intense of vegetables. The radish, admittedly, is more feverish, but the fire of the radish is a cold fire, the fire of discontent not of passion. Tomatoes are lusty enough, yet there runs through tomatoes an undercurrent of frivolity. Beets are deadly serious.

Slavic peoples get their physical characteristics from potatoes, their smoldering inquietude from radishes, their seriousness from beets.  The beet is the melancholy vegetable, the one most willing to suffer. You can’t squeeze blood out of a turnip…  The beet is the murderer returned to the scene of the crime. The beet is what happens when the cherry finishes with the carrot. The beet is the ancient ancestor of the autumn moon, bearded, buried, all but fossilized; the dark green sails of the grounded moon-boat stitched with veins of primordial plasma; the kite string that once connected the moon to the Earth now a muddy whisker drilling desperately for rubies.  The beet was Rasputin’s favorite vegetable. You could see it in his eyes.”

“Nothing like a nice beetroot sandwich and a cuppa”  My Dad.

Artist Credits from top to bottom: 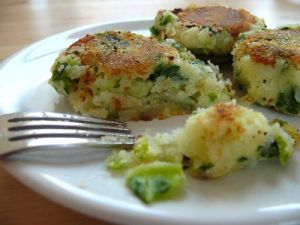 Phew! If you’ve made it this far you are a dedicated reader and are justly rewarded by this classic British BUBBLE AND SQUEAK RECIPE (named after the sound it makes while cooking). There is actually no specific recipe – it is simply a way of creatively using up whatever you have left from dinner. The major components are usually mashed potatoes (the glue holding all the other vegetables together) and cabbage.

An alternative is to mix the potato and vegetables and form into small patties then fry as above.

Bubble and squeak makes a lovely lunch with a fried egg on top.

34 thoughts on “artratcafe CAFE – Potatoes and Cabbage and Beets, Oh My…”