For the next while artratcafe CAFE will be celebrating vegetables and offering them to you in fresh abundance. This week we sing the praises of the humble but classic onion with inspiration from two poets and a number of classic painters. The first poem is by Lorna Crozier (b. 1948), a Canadian poet and the Head Chair in the Writing Department at the University of Victoria. The poem, Onions, is from her sensual and delightful book of poems, The Sex Lives of Vegetables:
“The onion loves the onion.
It hugs its many layers,
saying, O, O, O,
each vowel smaller
than the last.

Some say it has no heart.
It surrounds itself,
feels whole. Primordial.
First among vegetables.

If Eve had bitten it
instead of the apple,
how different
Paradise”. 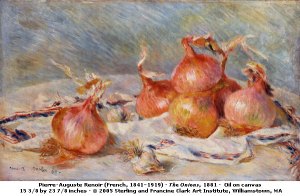 The second poem is a somewhat longer and more romantic Ode to the Onion by the Chilean poet, diplomat and politician Pablo Neruda (1904-1973).

“Onion,
luminous flask,
your beauty formed
petal by petal,
crystal scales expanded you
and in the secrecy of the dark earth
your belly grew round with dew.
Under the earth
the miracle
happened
and when your clumsy
green stem appeared,
and your leaves were born
like swords
in the garden,
the earth heaped up her power
showing your naked transparency,
and as the remote sea
in lifting the breasts of Aphrodite
duplicating the magnolia,
so did the earth
make you,
onion
clear as a planet
and destined
to shine,
constant constellation,
round rose of water,
upon
the table
of the poor. 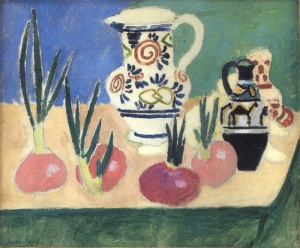 And what is a celebration of the onion without a classic recipe: French Onion Soup:

In a heavy pot, melt the butter over medium high heat and begin to cook the onions. Lower the heat to medium-low and stir occasionally for 25 minutes until the onions begin to caramelize and turn golden brown.

Add the garlic and flour and continue to stir for 2 minutes. Begin to blend the stock, 1 cup at a time and add the white wine. Stir continuously and bring to a boil. Add the bay leaf and thyme and season with salt and pepper. Cover and simmer for an additional 25 minutes. Remove the bay leaf.

Slice the baguette and spread a thin layer of mustard on each. Preheat the broiler in the oven and cover the soup with an even layer of baguette slices. Top with the Gruyère cheese. Slide under the broiler and cook until the cheese has melted and begins to bubble.

Ladle into a bowl and serve with one or two of the baguette slices. Delicious with a salade niçoise. 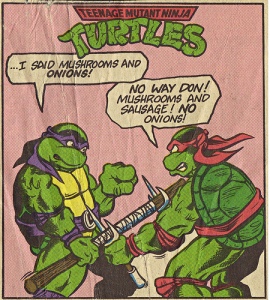 12 thoughts on “artratcafe CAFE – The Onion…”