a) The role of the gallery in determining art value(s);

b) The appropriation of art images; and;

c) Authorship or the question of who owns an image and what are the criteria that determine ownership.

I address each question as we look at my five chosen pieces:

a). The role of the gallery in determining art value(s) – related to this the gallery write-up went on to say: The Gallery has long-held the distinction of being the purveyor of art taste and status and, most importantly, value. The Gallery, through curatorial choice, determines what art will be displayed and accepted as worthy for consumption. This Exhibition challenges the hierarchy of gallery protocol and it’s position as the overseer of art values. This brings into question the role of the gallery “as the overseer of art values”. There is a long history of gallery owners supporting and promoting innovative forms of art: In 1910 Picasso painted a portrait of Ambroise Vollard, one of the most important art dealers in Paris at the beginning of the 20th century. In 1893 Vollard opened his own gallery with an exhibition of sketches by Manet. As the most important art dealer for the avant-garde, he organized exhibitions and supported works by Cézanne, van Gogh, Picasso and Matisse.

Alfred Stieglitz, 1864-1946 was a famous American photographer and husband of Georgia O’Keeffe. He was instrumental in bringing new art from Europe to the USA. His ‘291 Gallery’ in New York was the first to show work by Brancusi, Matisse and Picasso.

I understand that the gallery is a business but I also believe that the gallery needs to take risks rather than exhibit only what always sells. It has an obligation to the art world to promote new visions in art.  justiFYD: Art Crimes in America  reflects an adherence to this ‘obligation’ and I give kudos to this gallery for taking this risk.

Whimsy MRDF is one of the more successful examples of the collaboration between Pashak and easer one. Pashak’s Pop influenced stencilled letters and text and easer one’s gestural, flowing, almost arabesque spray-painted tag converse with well-matched tension. The flatness of the text contrasts to the 3D realism of the horse head and the actual texture of the cement surface. The refined realism of the horse shows Pashak’s classical training while the calculated spontaneity of the dripped paint reveals his modernist leanings. The carefully applied dots and composition of text and colour easily accept the tagger’s signature. As in all the paintings in this exhibition this is a complex postmodern collage of images that refer to styles of the past and incorporate street art of the present. A number of distinct styles of art exist comfortably within this particular work, although this is not true for all of the art in this exhibition. 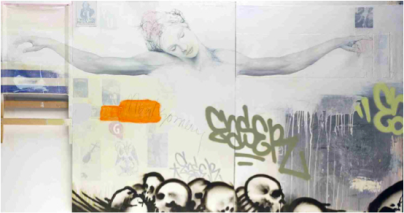 The next question posed by the gallery write-up is about:

b). The appropriation of art images. ‘Appropriation’ has the negative connotation of stealing or fraud. Taking something belonging to someone else and using it for one’s own purposes. In this case the word doesn’t apply because the tagging was used with full permission and active participation by easer one. If Pashak had done the tagging himself, ‘appropriation’ might apply. The more interesting and meaningful question is – how does the radical, anti-social, anti-gallery role of the street artist change when his/her art is incorporated in a gallery setting? In I Want You we again see Pashak’s classical drawing background along with painted over collage, the obligatory modernist drips and an attached actual folding chair to contain the extended arm of the figure. The street artist easer one has tagged the painting and also added skulls, creating a Golgotha or Thanatos symbolism to the work.

The title 112263 refers to the date of President Kennedy’s assassination.

c). The authorship or the question of who owns an image and what are the criteria that determine ownership? According to Bruce Pashak, this was arranged with easer one – who was present at the artist’s talk and confirmed that all was agreed and fair. The more pertinent question is, can two or more artists work on a piece with viable results? It has been done – Pashak says, “There is a historical precedent set for works of art produced by a group of artists. Notably, the Canadian collective General Idea and the ‘infamous’ collaborations of Warhol and Basquiat”. It is worth noting that the artist’s labels in the show didn’t include easer one’s name. easer one was paid for his work and was given a directed freedom to bomb where he wished on Pashak’s canvases. An honour system existed between the two artists.

After the three questions dealt with previously, the exhibition introduction goes on to say: ‘justiFYD opens a dialogue between producer and seller, producer and producer and the constructed value of art both as a product for consumption and contemplation’. Surely all gallery art is a dialogue between producer and seller and is also a product for consumption and contemplation. The only difference here is between ‘producer and producer’ and this dialogue appears to be open enough to result in an interesting collaborative show. What is missing in the gallery write-up is the question of the dialogue between the producer and the viewing public. Being present at the artists’ talk and at various other occasions when the public stated their views, I can confirm that this collaboration is a difficult one for the viewer. From the Realists on, the public has always found new art forms to be difficult to accept, yet, eventually the public does accept and the ‘new art’ of the past becomes the ‘traditional art’ of the present. Monarchy was given, at the artist’s talk by Pashak, as a prime example as what he was looking for in his collaboration with easer one. An ‘uncomfortable tension’, or a ‘disturbing violation’ is set up with the intent of making the viewer look closer and question their preconceptions of what art is. The postmodernist approach of these paintings rejects the traditional concept of art as being done by one person, (the anti-social artist in his ivory tower), of containing a single style and of being safely accessible and commercially successful in the gallery setting. The tagging of easer one almost creates a screen over the classically rendered face of Monarchy and forms a separation between the viewer and the face. At the same time the colour and intense texture to the right of the face invites tactile participation. This tension is consciously created to add to the almost surreal incongruity of the painting’s elements. 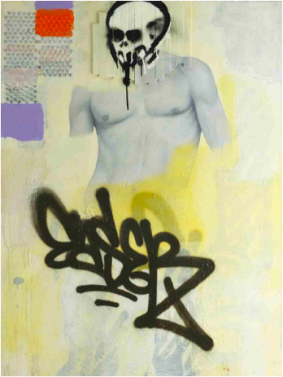 In this painting we can clearly see the process of collaboration between the two artists. Pashak presents his male nude to easer one. easer one tags the painting and adds a skull to the nude. Pashak then paints back into the canvas. This process is the same for almost all of the works in the show. It is a dance between the two artists with each performer sensitively sharing the canvas’s arena with the other. It is a meeting of chance and the results are not always comfortable or even aesthetically successful. The American writer, Gertrude Stein, Picasso’s friend and patron, defended Picasso’s daring. She wrote,  “Every masterpiece has come into the world with a dose of ugliness in it. This ugliness is a sign of the creator’s struggle to say something new.”

The world of graffiti and street art is a wholly separate one from the art world of galleries and it is involved in a ‘struggle to say something new’. Much of the style of graffiti originates from the necessity of a speedy execution due to the illegal nature of the act. This brings to light many questions, including – if easer one is now relieved of speed in execution of his art, does that change his art? Is Pashak now an accomplice to someone who has committed illegal acts? Now that easer one’s signature is known in a gallery setting, can the law track him down? Does graffiti and street art lose its raw quality when introduced in a gallery setting? How is this type of collaborative approach viewed by hard-core street artists – is it ‘selling out’?

Pashak / easer one’s art challenges our way of seeing and requires the viewer to question what is known and how that knowledge effects what we bring to an artwork. They place known subjects, such as the human body, into surface contexts that are incongruous to our preconceived ideas. They go outside of the gallery and commission the ‘radical’ art of the street into collaboration; they violate and integrate fine art, extending modernist boundaries into a new, post-modern visual style.