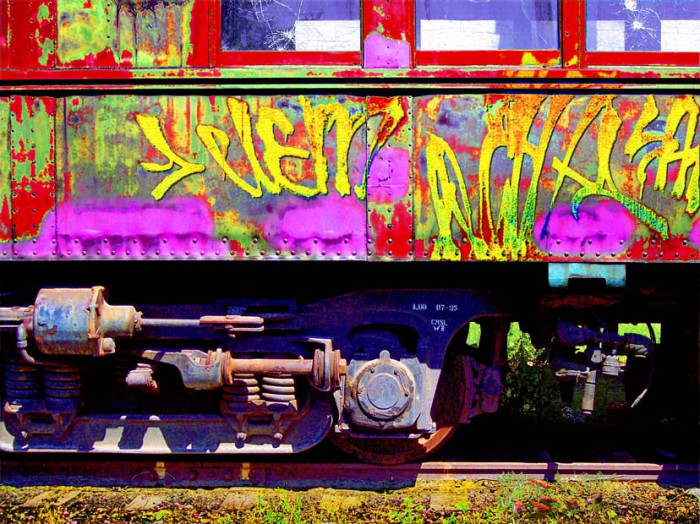 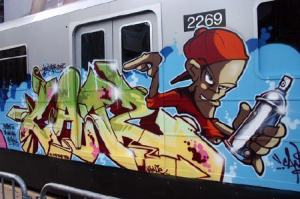 While the ‘High Art’ Pop Art movement was enjoying public and financial popularity in the galleries of 1960s America and Europe another, more underground art movement, was growing: Graffiti. In the American streets of the late 1960s, political activists wrote their beliefs on walls and gangs used tagging or signatures to mark territory, especially in the streets of Philadelphia. This movement spread rapidly to New York where graffiti taggers “bombed” trains (To bomb or hit is to paint many surfaces in an area). The first ‘bombing’ of trains consisted of ‘regular’ writing styles but as the popularity of tagging grew so did competition amongst the taggers and each graffiti artist needed to distinguish themselves. Initially ‘bubble lettering’ replaced regular writing but this was soon replaced in its turn by “wildstyle”, a form of graffiti writing that would come to define the art. Wildstyle is a complex and intricate form of graffiti writing. Its multi-layering of interwoven and overlapping letters and shapes, arrows, spikes and various decorative elements make it one of the most difficult and complicated tags and when mastered define the artist as a ‘king’. Wildstyle graffiti writings are known as “burners” or ‘hot’ writing. Because they are so complex and time-consuming to apply they are challenging to write in the limited time given for execution before being discovered. Time is an important element in graffiti writing due to its illegal nature, large fines and risk of being caught. In “whole train” tagging all train cars were completely covered with paint on both sides. This difficult task was often done by multiple artists or crews and with limited colours – often just black and silver. The limitation of time to accomplish this before being caught was the challenge and the test of tagging ability – often the writers had 30 minutes or less to complete their task. This required tight teamwork amongst a great many accomplished taggers, but when successful has become one of the more respected forms of graffiti writing. Wildstyle, as opposed to regular, early graffiti writing, can be considered artistic text – letters and words that are also art. In their sensitivity to colour and form they meet all criteria for art, despite their social illegality. This form of graffiti is considered to be ‘outsider art’ but is art none-the-less. Throughout the history of western art the public and state have always denigrated all new forms of visual expression. Graffiti is no exception. In this exploration of text in art I begin by looking at graffiti on trains as an early stage of this art form.